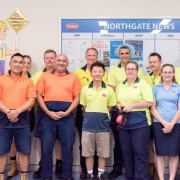 I have been very fortunate with my Kraft Heinz adventure to date. As part of the Operations Graduate Program, I had the opportunity to undergo an induction at the Golden Circle Factory in, Northgate.

Our first field trip was to a Pineapple farm a couple hours North of Brisbane. Upon arrival, we were greeted by an almost unfathomable sea of… rather odd-looking leafy plants. This caught me by surprise. Perhaps it was because I’d assumed that like most fruits, pineapples grow on trees; or because I’d associated them with pine trees. As it turns out, pineapples grow as a cluster of berries that develop from rich, colourful flowers. John, the owner of the property, was a third-generation farmer. He told us about the pineapple crop as we watched his workers wade through the waist high bushes, twisting and detaching pineapples with ease.

Getting the Six Sigma under the yellow belt

The following few weeks consisted of yellow belt training, which was presented by Bruce Taylor, who is usually found at our Hastings site. His enthusiastic and engaging demeanour, combined with the powerful message of his lessons, left our small group hanging onto his every word. To finish the course, we were tasked to complete a continuous improvement project in pairs, which we would eventually present to the Golden Circle team. This was a fantastic chance for us to be let loose on the site and take charge of our own learning.

The remainder of my time with the Northgate team was spent rotating between different functions. I started on the food line, where in a single day, over 160 tonnes of pineapples or 100 tonnes of apples would be processed. Much to my dismay, one particularly hot Brisbane day saw me at a conveyer belt, hand sorting juice grade pineapples. I remember the overwhelming volume of pineapples toppling in, one after another, from a seemingly endless supply of crates. But in hindsight, it was a rather fun exercise that may have left me with a misguided sentimental attachment to the pineapple.

The other departments on my rotation included the cordial, hot fill juice and combi-pack filler lines. It was a highly rewarding experience to meet the operators, head operators and area leaders. Our conversations allowed me to better understand the major hurdles that need to be overcome, and the key factors that drive them to perform and achieve Kraft Heinz targets. I believe this will be critical to my new role at Freshwater in Melbourne.

My last few days with my Golden Circle peers were spent learning about the onsite finance, planning, R&D and quality roles. These, I found were art forms in themselves.

Goodbye, but not farewell

Leaving Golden Circle after my 7-week adventure was a bittersweet experience, not unlike the taste of pure orange concentrate, which I would not encourage to the light of heart. During my time in Brisbane, I have developed many precious friendships (including that with the hotel concierge); grown from a plethora of experiences; and pushed myself beyond my comfort zone. That aside, I am very excited to start my next chapter with the team at Freshwater, where I hope to apply my new level of understanding of life on the site.